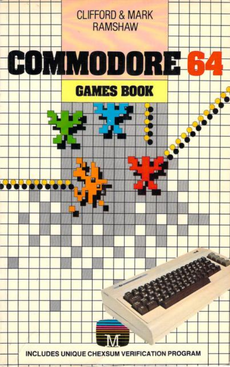 Melbourne House published a fair number of type-in books in the 1980s and they were often good value for money. This book by the Ramshaw brothers (as I'm going to assume they were) is no exception, and actually spawned a sequel (Commodore 64 Games Book 2 - funnily enough).

There are 30 different programs/games in this book that cover a wide range of game types and programming techniques. It feels like each program has been picked to show an example of different C64 programming tricks but in a game context. So we have hi-res graphics, we have arrays and variables, sprites, characters, smooth scrolling, collision detection and a host of other examples.

Another nice thing about this book is that each program has a short introduction giving the game controls and then a breakdown of what each part of the program is doing, an explanation of the variables used and grid designs for the sprites. This goes a long way to help you understand the flow of the program.

The programs are mostly in BASIC - the smooth scroller routine being the exception - which does limit the smoothness with which they play. However, the point of this book is really to demonstrate approaches to programming different game types, and in that respect the games do a very good job.

The 30 games are as follows:

Paranoid - this simply (and slowly!) prints a fractal image on the screen as a demonstration of the hi-res graphics mode
Poetry - a simple text-based program that generates "funny" poems using arrays stored in data statements
Turkey - titled as 'super waiter' in the game itself, you play as a waiter trying not to drop a flying turkey in a sort of 'pong' type game, but with a turkey. Obviously.
Quack - a duck shoot game with a bow and arrow!
Laser Tower - this is a gravity-based dodge game where you have to guide your ship away from the laser beam.
Moon Buggy - another gravity-based game, this time you have to manoeuvre your buggy across the surface of moon, using your thrusters to 'bounce' over obstacles without hitting star mines.
Higher or Lower - a card game where you gamble on whether the next card will be higher or lower.
North Sea Copter - this game is just hard. Really, really hard. Land your 'copter at night in stormy conditions. You only get to see the landing pad when lighting strikes.
Flight Simulator - a simple flight simulator where you have to land your plane. Pretty impressive in BASIC, this.
Slalom - a simple dodge game as you move your skier between objects as they ski downhill.
​Fruit Machine - a fairly rudimentary fruit machine simulator.
Sea Harrier - destroy the sub from your harrier jet using a depth charge.
Cats & Dogs - errr... catch the suicidal cats and dogs as they fall from the sky (although it's unclear where they've come from).
Horse Racing - bet on the horses and watch as they 'race' across the screen.
Luna Landa - the classic gravity-based game. Land your ship on the landing pad without hitting the scenery or running out of fuel.
Simon - a variation on the classic guess the sequence game.
Racer - a simple racing game. Dodge the traffic as you race along the track.
Cosmic Bugs - creepy crawlies move towards you down the screen and you have to either capture them in nets or blast them...!?
Star Duel - a space-based dog fight with the computer to see who can destroy the other first.
Cowboy Shootout - a bit like the game above, but with cowboys!
Earth Defence - a space shooter where you have to destroy as many aliens as possible before your fuel runs out.
Jelly Maze - this is a variation on Pacman. Move around the maze avoiding the jelly creature, unless you've eaten a pill which allows you to eat the creature.
Dark Star - you're in a ship that looks like an X-wing shooting down ships that look like tie fighters while flying across something that resembles the death star. Except it's a dark star. Not a death star. A pretty good attempt at the classic Star Wars shooter though.
Tank Attack - another alien/space attack style game. Shoot down the spaceships with your tank before they land.
Star Pilot - imagine Elite but without the planets and trade and all the other bits, just the shooting at other spaceships bit. That is what this is. I might still have oversold it. To be fair though, to do that in BASIC is pretty neat.
Martian Invasion - this game was definitely written after watching the 1980s TV series The Tripods. Another 'defend against the aliens' game.
Castle of Doom - a nice example of a simple multi-screen game where you wonder the rooms of a castle avoiding baddies.
UFO - shoot down the UFO. There's not a lot to this game really, but it does include a good example of a smooth scrolling routine for the landscape.
Galaxy Raid - a nice litter space shooter with waves of aliens attacking in formation.
Invaders - a rendition of the classic space invaders game.
Buyer’s Guide
This pops up quite regularly on both eBay and Abebooks, and while it may often be over-priced on both you should never expect to pay more than about £2-4 for this. So don't. I had about four copies of this at one point.