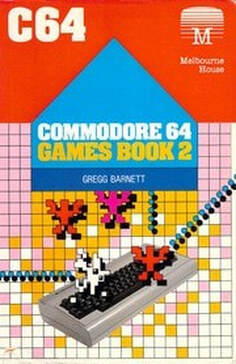 Melbourne House wasted no time in following up the first 'Games Book' by Clifford & Mark Ramshaw, with this second book coming out the following year. So popular were these books it opens with a message from the publisher pointing out the success and informing the reader that the same level of care and attention to detail has been taken as with the previous book.

They're not lying either. As with the first book, each program begins with a picture of the game and a list of variables used within the game. The program itself is then split into chunks, with a little box above each chunk briefly explaining what that bit of code does. There's then a checksum provided, helping to avoid the inevitable type-in errors that many of us became familiar with.

A nice little bonus with this book are the occasional full-colour pages scattered throughout which show screenshots of many of the games within the book.

There are 28 programs this time, and they are grouped by 'type' of game in the contents: defender games; logic games; evasion games; coordination testing games; shooting gallery games; racing games; strategy games; two-player games; interception games and a novelty program!

As well as this large array of games, the book contains a couple of handy utilities: a machine code routine for handling sprites that uses interrupts and some example programs on how to use it; and a program that allows you to design sprites using the cursor keys.

As with the previous book (and most of these type of books) the programs are mostly in BASIC, with all of the limitations that brings. That said, there are a good range of ideas and techniques on show in this book, enough to have given any budding young programmer of the day a good grounding in basic game creation on the C64.

The 28 games are as follows:

Dumper - an alien ship is dropping bombs and you have to fill in the holes with your little dumper truck
Mind Quiz - a puzzler where you have to guess the order of coloured beads
Treasure Hunt - you have to move around a maze collecting 'treasure' while avoiding the, er, killer duck. Yes. Killer duck.
Stepping Stone - move across a river using the moving stepping stones. Like a mad Frogger without the traffic.
Plane Chase - shoot the planes in your sights. As difficult as this is, it's still an impressive BASIC game.
Minotaur - you have to move to the exit stepping on the smallest numbers possible as you do. Hard!
Spy Training - not sure where the espionage comes into this seems as you seem to be in the middle of a gun battle. One where you inevitably lose. Or maybe that's just me...
Dragster - drive your racing car down a very, very narrow road avoiding the oil slicks that appear to be all over the track!
Astral Attack - guide your ship through a star field trying not to hit, the, um, tiny, tiny planets. Or is it a massive ship?
​Stuntman - drop your stuntman out of the plane and aim for the trampoline, not the fence!
Convoy - you're in an underground river, as you do, and must blow up parts of the road to make trucks drop into the holes
Egg Plant - destroy the, er, 'egg creature' by shooting through holes in a moving fence. Not an aubergine to be seen...
Tank Ambush - bomb tanks that you can't see because it's dark, except briefly when you launch a flare. Hard.
Brick Buster - the clue is in the title. This is a variation on breakout.
Alligator! - move an alligator around eating fish. But not mines. Don't eat the mines!
Road Patrol - drive a car and try to shoot through an (impossible!) force field at a UFO that, er, can't be destroyed. Ok then...
Snake Pit - a variation on the classic snake game, but with two players
Detonator - use your spaceship (!) to drop bombs on mountains and blow them up
Letterbox - letters drop down the screen and you have to catch them and post them. This is hard, but good fun
Crash Barrier - drive around a track as fast as possible but avoid the crash barriers that randomly appear. Yikes!
Laser Battle - shoot the aliens before they blow up the nuclear reactor. Damn those aliens!
Attack of the Vogons - basically a pretty difficult dodge game. No poetry involved.
Interceptor - shoot the aliens before they land by setting XY coordinates for your shots.
Breakin - the clue is in the title. This is a var.... wait a minute!
Tanc - two-player shoot at each other type of game
Clucky Chook - BWHAHAHAH....Clucky Chook? HAHAHAHAHAHA. HA. Catch eggs from the (snigger) Clucky Chook
Soldier - you're in a tank, where you're safe. But you have to leave your tank and enter a minefield whilst being shot at with missiles. Or just stay in the tank where it's safe. I dunno.
Birthday Party - an animated birthday card for yer mum. Just what she's always wanted.
​Buyer’s Guide
This pops up fairly regularly on both eBay and Abebooks, although it has had a tendency to be over-priced as of late. I'd hold out until you see this appear for about £5.